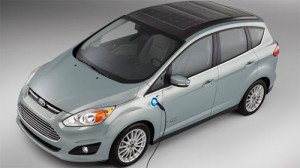 Ford has recently unveiled the plan for Prototype Solar Powered Hybrid car in collaboration with Georgia Institute of Technology and Sun Power Corp.

The concept car will be on display at CES (Consumer Electronics Show) in Las Vegas on the 7th January 2014. The  Ford C-max solar energy concept car has a solar panel system on the roof which will use a separate off-vehicle solar concentrator lens (Fresnel lens) …quite similar to a magnifying glass to absorbs maximum solar energy. The roof lens will track the position of the sun from east to west and boost the sunlight by a factor of eight.

The Solar energy concept car performance is similar to a conventional plug-in hybrid car as both the vehicle would have the same range of 620 miles performance….also, researchers claim that in future more than 70% of all tips travel by a user in a solar hybrid vehicle only…possibly, the FORD researchers have intelligently use the solar technology which assists battery charging which ensures the drivers will not be dependent on the grid to use the vehicle.

I am sure this technology will get success and will save trillion liters of petrol every year.